In the true spirit of Christmas (or to the extent a Muslim acknowledges that the Gregorian calendar can be used to determine the birth of Jesus?), I have decided to write about Prophet Isa/Jesus (eternal peace be upon him). Mostly the things I feel are not discussed as often as they should be in the West.

The messenger of God, who, although transcends skin colour and racial division is and has instead been used as a tool to persecute minorities. Instead of celebrating Jesus as a radical revolutionary who questioned preconceived notions within society, we focus on the physical appearance of Jesus –  not as a Middle-Eastern prophet, but as a White saviour.

I often think about the many ways the Prophet Isa/Jesus (may eternal peace be upon him) mobilised the people of Judea to think of worlds greater than the Roman Kingdom. His ideas were revolutionary and threatened to undermine thousands of years of social tradition.

He was a messenger of God, sent to help the people liberate themselves from the shackles of society and a despotic leaders who confined their understanding of divinity to a temporal and transient concept.  He chose to sit in the presence of the outcasts of society, the poor, the sinners, the sex workers, the ill. Jesus’s message (much like all of God’s messengers) was spread at a time where the people were blinded by materialism and luxury, people who could not see or hear the cries of the oppressed. He spent his life fighting the good fight, ensuring these voices were heard. He was a radical revolutionary, one who lifted the spirits of those who were willing to spread the message of peace, justice and equality throughout the land of ancient Judea and beyond.

Jesus practiced an informal form of socialism – one that sought to restore the power back to the people. An anti-capitalist, anti-fascist and anti-supremacist messiah, the Prophet stood for and with the marginalised people of his community and left the Earth with the hope of returning* to restore the peace that would one day be violently taken from his birthplace and its people by a vicious ideology – Zionism.

Growing up, I attended a Christian primary school. I was surrounded by images, paintings and murals of Jesus Christ. What I noticed and found particularly interesting was that in all these depictions of Jesus, was a fair-skinned, brown haired, light eyed ‘supposedly’ perfect man. Other than a few sentences of his birthplace, our teachers would pay little lip service to the social and historical context in which Jesus emerged and spread his teachings (Palestine). Yet, if Christians accept Bethlehem as Jesus’s birthplace, they must also accept that Jesus was a brown-skinned, Middle Eastern revolutionary – far from the way he is depicted in almost all the churches in the West.

Many would argue that Jesus’s skin colour is of no importance. And yet, if we were to understand the powerful impact of colour being used as a tool to justify the subjugation of non-White bodies we will realise the importance of remembering Jesus as a black revolutionary. A revolutionary who had more in common with the outcasts of society than the racist European seeking to colonise a land and its people.

By whitewashing the Arab Prophet, the mainstream Christian community have created a cognitive disconnect – whereby they can feel a deep sense of connection to Jesus Christ but have little empathy or solidarity with people of the Middle East, people of colour, people seeking asylum – all characteristics which Jesus so proudly identified with. This has, in effect, contributed to the ‘Othering’ of Middle Eastern Christians. To the extent that the voices of the Palestinian Christians have been perennially silenced. To the extent that the struggles of refugees and the Indigenous People have been perennially silenced. To the extent that the people seeking asylum, the disabled, the terminally ill, have no place in the White man’s perfect world.

Historically, viewing Jesus as a White Saviour aided and abetted the expansion of Europe’s settler colonial project. Christianity has been used as a tool to seize territory and justify the enslavement of black people. Using Christianity lead by a White Jesus made the vision of subjugating the black or brown ‘Other’ clearer. The idea of ‘saving’ Indigenous people of Australia, America, to save the subcontinent of India, undeniably stems from the perception that Jesus was a White man – making forced conversions and aggressive proselytisation seem like a mission sent from the heavens.

The images that have been embedded into my own mind since I was young have made me think – would the world be a different place if we remembered Jesus as a brown man? Would he be any less of a hero in the eyes of the Europeans, if he did not fit the standard physicality of a White man? Would the Europeans have ever felt the need to invade our ancestral lands and ‘save us’ from ourselves? In light of this, the question of Jesus’s ethnicity requires an analysis of the metaphysics of Christianity.

When asked about how Jesus would look like, Reza Aslan (renowned Iranian-American scholar and academic) writes, ‘well what we know about him is that he was Galilean. As a Galilean he would have been what is referred to as a Palestinian Jew. He would look the way that the average Palestinian would look today. So that would mean dark features, hairy, probably a longer nose, black hair…’. In this same interview, Aslan makes an interesting point that the ‘Christ of faith’ differs from the Jesus of history because in Christianity, God is metaphorically a man (through Jesus), which then allows you to define what that man is and how he ought to look. ‘If you’re a blond, blue-eyed, white suburbanite then God is a blond, blue-eyed suburbanite’. This makes it easier to perceive Jesus as a White man and thus strengthen the colonial endeavours that perpetuate a dangerous White Supremacist mindset.

The Prince of Palestine

I decided to dedicate my blog post to Jesus, the prince of Palestine. The one who stood in solidarity with the minorities, the one who was of the minority, the one who risked stability for peace and justice and the one who stole the hearts of the people with his kindness, generosity and resistance. 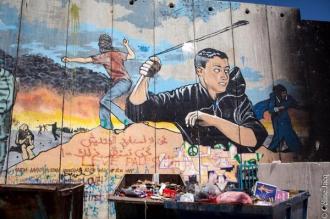 Images of some graffiti paintings on the Israel Apartheid Wall in the Occupied West Bank taken from @PalestineSocial on Twitter.

Jesus, prophet Isa, belonged to Palestine. What we witness in Palestine is a wicked regime – one that bears semblance to the oppressive empire that Jesus fought against. We witness the complete subjugation of Palestinian Christians and Muslims on a land that was once so holy having been the homeland of our pious predecessors. What we witness in Palestine is a settler colonial project, a malicious ethnic cleansing that has left over 3 million Palestinians controlled and contained in an open-air prison in the West Bank, Gaza Strip and greater regions of Occupied Palestine. Try as the illegal State of Israel may, of one thing we are all certain. These holy lands will once again know peace and justice. Palestinians then and Palestinians now await the day these holy lands will no longer be tainted by the blood spilt by war criminals and genocidal maniacs.

We await the reappearance of our beloved Prophet Isa alongside his companion Imam Mahdi, who, by the will and mercy of God, will reclaim Palestine once and for all. It is only a matter of time before the revolution emerges in Al-Shaam (modern day Syria, Lebanon, Palestine, Jordan), when we will no longer be bound by the oppressive system of the modern era and we will rejoice as we come to see that the power will always rest within and amongst the people.

** Within the Islamic tradition, it was not Jesus but instead someone who was made to appear like Jesus who was crucified in his place and that God lifted the prophet’s soul days before his ‘crucifixion’, with the promise that he would be resurrected before the day of Judgement to unveil the Truth of his prophethood.